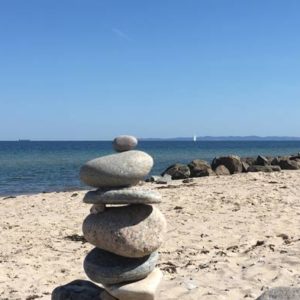 99.9999999% of people in the Western world are “living Life from outside in” That is why there is so much pain, suffering and wars. Here we live in separation and duality, believing that we are victims of an objective world outside us, or a subjective world inside us. Both are unconsciousness notions.

Now and then their come an awakened being that try to help people out of this mess, but very few listen! It is difficult to come out of this collective unconsciousness because this total ignorance is reflected in our language, and both science and psychology lives in it.

We have to go thousands of year back in Asia to re-discover a language that have words and understanding for a much deeper and radical understanding of life.

The East call the last thousands of years for the “Kali Yurga”. This last one ends after periods of times where society gradually has fallen from a higher civilisation to a lower. The old scriptures say that after the Kali Yurga we will start with a high one again ( Sat Yurga-time of truth ). Lets hope so!

The first problem we meet is with the family and surrounding! They think we are weird and they even get worried for us. Thy don’t understand and may even think we are getting crazy.

In Zoroastrianism ca. 600 before Christ they had this distinction between “Camel, Lion and Child”.

Fredric Nietzsche (1844-1900) wrote a very famous book, “Also Sprac Zarathustra” It is translated to many languages.

The Camel, Lion and Child

The Camel is the part of population that is scared of saying NO! They always say YES out of fear of being rejected and alone. Most of the population is-like 600 yers ago-scared of being different from the rest. So they do and think like every one else. Here, you live in believes and social conventions.

Very few get enough of it, doing what every body else is doing! And even at this time in some places in the western world you cannot  say NO without risking your life. In the Muslim countries it is still very risky to be different.

But being different is still a fear sitting in the collective unconsciousness also here in Scandinavia. I experience that Denmark is most free of the Nordic countries.

When we say no to conventions and believes- the Lion-there is a chance that we begin to investigate for our self and go in. To have this courage to say NO is important, first step to freedom.

Many don’t get any further they live with a reactive NO afraid of falling back into the Camel, so the NO becomes reactive, which of course is not the end.

When we live in one of the two mentioned reactions, Camel or Lion we are predictable because we live in a pattern of fear. It is the “ego-mind”. The ego can be understood as a strategy of survival that we build from we are born. This strategy is about getting love basically. We are reacting because of fear of rejection.

If we go deeper into the Lion and not just let it be a reaction pattern that are more or less predictable, we may move into the “Child.”

The child-like quality is the awakened consciousness. This consciousness is not influenced by fear so it is “responding to situation and not reacting.“ This child consciousness has of course nothing to do with age. But there is similarities, the child  is naive and unpredictable because it had not ben conditioned yet-“the should and should – not are not yet matured” so fear-ego is not yet running the show.

So if we lived in a society with more “children” meaning more responsibility every thing would look very different.

To move from the Camel over the lion to the Child is awakening. The little child is naive, the one that has awakened is “like” a child, there is no ingrown programs that is reacting unconsciously, that is why i call it “responding”

If you look at the old Asia again, many men and woman left husband and wife to become monks, Sadhus. To leave the family, saying NO-was needed, to come free of the family. In those days it was needed also for the reason that to pursue your enlightenment you could not also uphold a big family. Monks left for the forest or mountains to meditate or they became wandering Sadhus-holy men, women. Living from begging, that was also a way to achieve enlightenment because it was surrender. God decide if you get the next meal.

But the old India saw also this surrender from another perspective. These people where not seen as beggars, in the exchange with them you would give them food and they would give your “Darshan”. We don’t have a translation for this word because in our low culture we  don’t fine so many awakened people! The most close translation is “transmission”.

Also the understanding of non-duality, oneness was so deep in the old asian cultures that people new that supporting someone, is deep down supporting your self. And such a deep non-dual understanding is far beyond what we in the West understand. India has not started a war with another country for the last 10.000, years because they now that to harm another human being is to harm them self.

Yes, many in the West was also moving into monasteries and noneries especially in the middelage and later middelage.

The big difference here between the West and east is that in the West the monasteries and noneries was very close connected to the Organised religion Christianity. In the East you stepped out of Organised religion and it was fully accepted but not in the West. The few Cristian mystic we know about all where killed in the most gruesome ways,

Many of the noneries was also established to take care of all the woman that was left unmarried because few men was left after all the wares. What to do with all the single woman? They would easily corrupt the social order!

No doubt there has been awakened Christian mystic but most was burned.

Very different in the old east awakened people was honoured.

The glasses of Ignorance

Very few people experiences their experiences directly, people alway look through the “glasses” of words concept and opinions, in short through delusion-projection.

The moment you experience through language, you not only move away from the experience your also going into the past and future. Lets say you are experiensing jalousie. The moment you call the feeling (experience) jalousie, you most likely start judging the feeling and puling away from the experience because “you should not feel jalousie!” The next that happens is that you get occupied with all the memories and words about it. And that again takes you away of the direct experience here-now. Could you stay in the feeling here now without any explanation, without puling away, your will experience that the feeling of jealousy is changing into another feeling, maybe anger or low self esteem. If you go on resting like that into the feelings you will suddenly feel total free, because the truth is that all experiences are impermanent.

It is a sad fact that we don’t really understand this in our culture.

Living from Inside out

The Russian mystic George Gurdjieff, B. 13.01-1866. D. 29.10 – 1966, had a very famous saying, “Remember your self”. This is a way to live from inside out. If you always remember your self, you are very likely going to know, “That everything you experiencing is an appearance of who you truly are”. This realisation has nothing to do with thinking, it is a reflection of you being.

On The Edge of The Cliff